As a kid, video games were never celebrated. It’s a classic tale. My parents restricted my screen time. I couldn’t play Call of Duty until I was 13. I rarely received new games outside of Christmas and my birthday. In hindsight, I mostly respect those decisions. But as a kid, they sucked.

Video games would rot my brain. Violent ones were evil. Not to mention, just playing games was a hassle as well. Growing up, my home internet was faster over Wi-Fi than via ethernet (please explain that one to me), and even the Wi-Fi capped out at 1Mbps on a good day. I didn’t have reliable internet access and speeds until I moved to college. I couldn’t afford to explore new genres or series until I was 16 and started my first job. Until then, it was mostly CoD, Madden and Pokemon, the old standby series I knew would give me good bang for my buck.

Maybe that sounds like the entitled complaining of a “first world” kid, but I knew I wanted to make a career out of gaming since I was 14, and nearly everything from my childhood suggested the cards were stacked against me. Breaking the news that I wanted to go to college for journalism with the goal of writing for a publication like Game Informer was hard enough. Explaining that to professors was hardly any easier. After switching from news to strategic communications, I still felt disadvantaged. For as great a school as Ohio University is for communications students, its professors know close to nothing about gaming and esports. If I was going to make it anywhere, I felt I had to do it on my own.

I quit the established school publications and “prestigious” professional organizations with decades of rich history to work with groups none of my peers had heard of. I joined our esports club. I became the captain of a collegiate Overwatch team. I bucked the system because I had a plan and some determination.

And I swear, I’m not trying to sound cocky, like “Oh, look at me, I’ve MADE IT.” What is ‘it,’ anyway? I haven’t made anything yet. I’m only getting started in life. I’m not rich or famous, and that’s never been the goal. I just want to enjoy what I do for a living.

And you know what? I’m doing exactly that. For one of the first times in my life, I’m proud of something I’ve accomplished. And not just a little bit. I’ve never felt this pure joy before for something in life. No holds barred, I’m proud of myself. I’ve never said or written that before and fully, 100% meant it until now. I set a goal, one that even I thought was lofty, and I reached it. I have my dream job as a social media coordinator for an OWL team: one of only 11 such positions in the entire country. I just worked at the Overwatch League Grand Finals! Yeah, I’m proud of that.

I’m proud because for the first time, I’m a part of gaming being celebrated. I can help millions celebrate their passion. I’m thrilled to be a part of this. On Sunday, I witnessed 12,000 people screaming for joy because of video games. The very medium that I and every other kid was told would be a waste of time and would never get us anywhere. I watched people cheer for OWL champions being crowned over the weekend in Philly the same way I watched people cheer for Franco Harris’ “Immaculate Reception” being crowned the best play in Steelers history last month, minus the vulgarity and intoxication.

For once, I felt validated for enjoying video games, and I could tell all the other OWL fans in Philly felt the same way. In public, fans would approach me at random and excitedly start talking shop, because for the first time, they found a fellow jersey-wearing OWL fan out in the wild. Team colors didn’t matter. Rivalries didn’t exist. It was time to celebrate Overwatch.

Would LA Lakers fans strike up conversations with Boston Celtics fans walking down the street? Probably not, but LA Valiant fans were more than happy to chat with me, clad in Boston Uprising blue. Appreciation for the game at its finest.

When everything culminated Sunday, when over $1 million hung in the balance, when millions watched from home, when the sold-out arena 12,000 strong saw the final overtime fuse sizzle down to smoke and burn out, and when the pyrotechnics ignited, all that mattered was that we love Overwatch and had the chance to celebrate an amazing year of competition coming to a close.

I had the unique privilege of seeing the Grand Finals action from, quite literally, both sides of the curtain. As a team employee, I worked throughout the week to hype up the festivities and shine a light on our player ambassador, blasé. As a fan, I screamed my lungs out during the match itself. There’s only one way to describe how the week felt: surreal.

I’ve spent my entire life being a nobody, as cliche as that sounds. As a kid, I was the homeschooled nerd who hardly socialized with people his age. In college, I didn’t enjoy the partying culture of my university. But I’m coming to terms with the fact that I’m now, in a weird way, becoming somebody that people look to. I’m not a pro player with adoring fans, and I’m not a general manager with an entire fanbase watching my every decision. But I’m the voice of a team. When the Uprising speaks, it’s me. Hundreds of thousands of people see what I produce on a weekly basis. And I guess that kind of makes me somebody now.

Last Thursday, I challenged OWL analyst Brennon Hook to a duel in front of a live studio audience of about 100 with over 1,000 more watching online. After I won, both the crowd and the online viewers cheered for me.

It was all in jest: Everyone obviously knows I’m far from a league-worthy player. But it was fun to be an entertainer for a few moments and to be the “hero” defeating Bren, the league’s self-made villain character.

It was at this moment that Brennon Hook knew… pic.twitter.com/Od25xFgDCj

That night, I signed my first autograph, for entirely different reasons. I wrote my name into a book alongside OWL legends because, to paraphrase the book’s owner, those of us behind the scenes don’t get the credit we deserve. Shinn, if you read this, I’m still flattered. I’ll never forget that moment.

On Friday, I spent the afternoon visiting museums with several pro players. I felt not like an outsider or intruder, but as a welcomed newcomer. They treated me as an equal, though they could have easily used their status as a way to exclude me. They’re all massive figures in Overwatch, after all. Yet they made me feel welcomed into the OWL family. Largely because of Swimmer, Dogman, Aspen and blasé, I feel that I do, in fact, belong here.

On Saturday, the Wells Fargo Center gifted me and some other OWL folks tickets to the evening’s Martin Garrix concert. While I didn’t feel deserving of a sponsored ticket, the set was phenomenal and was the perfect way to kick off the next day’s festivities. Garrix set the tone for Sunday, and the energy at both his set and within the arena the next day was infectious.

After the finals on Sunday, I was walking from the arena to the metro station, face buried deep in my phone to check the details of my upcoming flight, when I felt the poke of a rolled-up poster.

A fellow OWL fan who found my YouTube channel in January stopped me because he recognized me and knew me by name. Even though we had never met, he knew exactly who I was. Liem, I’m so glad I got to meet you. Thanks for following me from the start, and let’s get some games in soon!

I suppose that’s all a long-winded way of saying that for a few days, I got to enjoy the eerie feeling of being somebody ⁠— a somebody defined by the celebration of video games and recognized among my peers. I for once could feel entirely, unashamedly proud of what I do, and I was surrounded by thousands who feel the same. It was as if a giant filter bubble descended upon Philly for a few days. While I know I can’t live in that bubble forever, I think I speak for everyone when I say that it was refreshing to exist in a validating, affirming realm for our passion, just for a while. 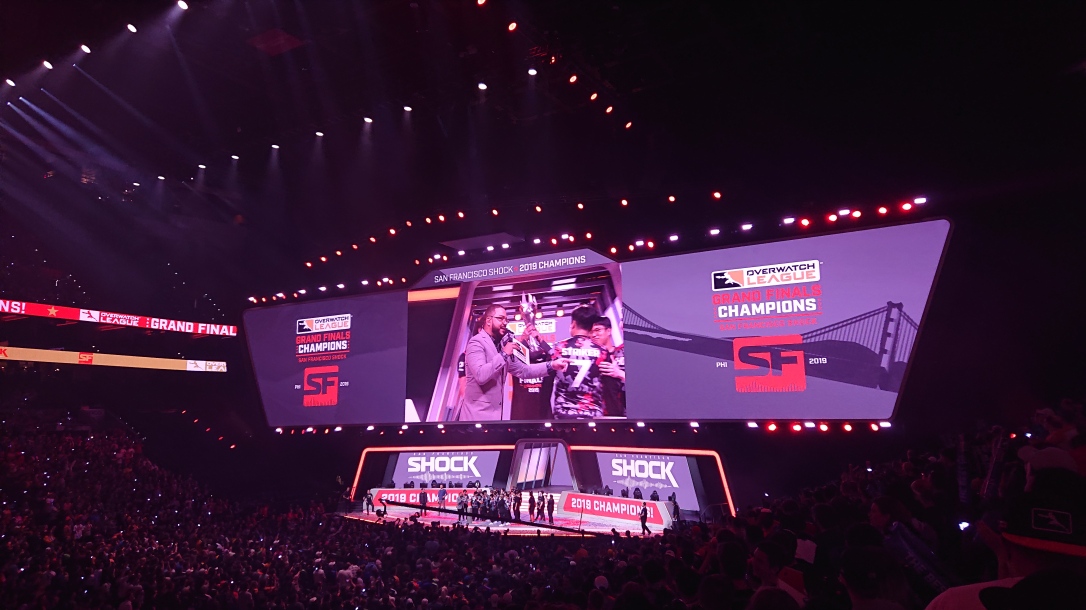 Maybe most importantly, last week gave me hope for the 2020 OWL season, when teams will play around the globe for the first time. I can’t wait to see Dallas fans cheering as rabidly for their team as Cowboys fans, I can’t wait to see London take to OWL like soccer. I can’t wait for the energy of the crowd in Guangzhou, rumored to be maybe the biggest hotbed of OWL fans in the world. The OWL 2019 Grand Finals make me totally convinced that OWL will continue to grow and succeed, even beyond my wildest expectations. I chose the correct career path. Following my passion was the right move, and now, I can rest easy knowing I didn’t lose everything on the gamble to go all in on gaming.

I am so excited to be even a small part of what happens next.

To 2020 and beyond. To an Overwatch League that takes over the globe. To more fans cheering their lungs out. To every bit of paint and hairspray put into the cosplays. To the countless hours put in by the pros to be the best at the game. To Overwatch. To gamers.

Let’s do this thing.