Over the past couple days, I’ve had the opportunity to start exploring Hong Kong, and to say this city is lively is a massive understatement. In the U.S., it’s typical for stores to be open 8 AM-5 PM. But here, many stores are open 10 AM-10 PM or later. Certain parts of the city, particularly those frequented by people my age, come awake long after the sun goes down. I’m typically a night owl, so this would seem fantastic for me, but students here take staying up late to a whole new level. Many won’t go to sleep until anywhere between 2-5 AM and sleep until noon on a regular basis. They even schedule classes around their sleep schedules. The walls are thin in my dorm, and these nocturnal students have been riding skateboards and dribbling basketballs down the halls at 3 AM. I’ve got to buy some earplugs.

Anyhow, enough complaining. Tuesday evening, my friend, Sam, took me around part of town to grab dinner and do some shopping. We started by taking the MTR subway system a couple stops to the Mong Kok district, which was rather crowded, even on a weekday. Mong Kok’s vibe reminded me a of a midway at a fair or festival at night. Street vendors, peddlers, bright signs, flashing lights, and crowds of people were everywhere. Storefronts held familiar shops like H&M and Pizza Hut, as well as unfamiliar ones.

Jewelry stores, tech and gadget shops, clothing stores, local restaurants and other establishments lined the streets. Most shops are placed on the ground floor of high-rise apartment buildings that stretch far into the sky. Sam explained some of the items the vendors were selling (octopus, animal entrails, stuffed veggies, fried chicken, cuttlefish balls, and much more of varying levels of familiarity), and he bought a rather tame dessert for me to try. It was essentially waffle batter rolled into a cone that looked like bubble wrap with the big bubbles. It wasn’t filled with anything, but you can’t go wrong with a waffle. He says the dessert is pretty common there, and I’d call it the Hong Kong equivalent of a funnel cake.

After perusing the area, Sam took me to one of his favorite restaurants for dinner. I can’t recall the name, but it served foods from a variety of Asian cultures. He pointed out some of the highlights on the menu, and we ordered a plate of fried rice, chicken satay skewers, a beef & noodle dish that I can’t recall the name of, milk tea and sticky buns. The whole meal was delicious, but the fried rice was definitely my favorite. Of all the fried rice I’ve had in the U.S., it’s most similar to Lam’s Garden in Athens (for all you Ohio locals who’ve tried it). The milk tea, a popular drink here, is typically unsweetened, but I liked it better after about half a pack of sugar. The sticky buns, essentially glazed, toasted burger buns, were a great way to finish the meal. 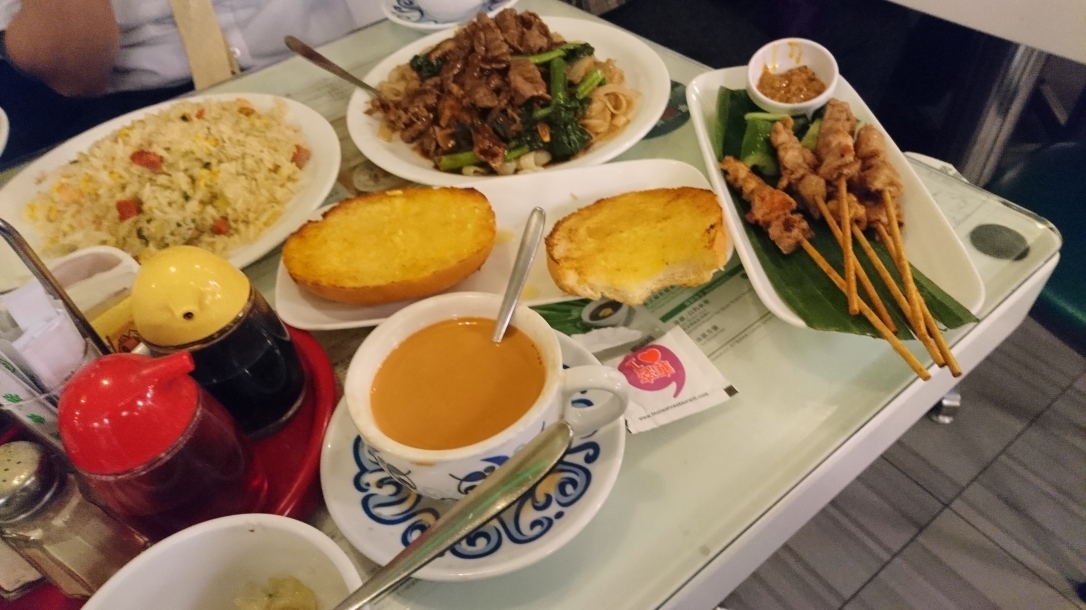 A few things stood out to me at the restaurant. When we walked in, we were pointed to a table, given a menu and left alone. Sam raised his hand when we were ready to order, and within a few seconds, the server came to our table. A few minutes later, all the food was out; I was amazed at the speed, but Sam said the service was considered slow, as restaurants work as quickly as possible to feed customers and free the table for new ones. Other than to bring new dishes of food, we were left alone, so there were no awkward moments of being asked “so, how’s the food?” in the middle of a huge bite.

Second, we didn’t tip after the meal. Sam says the only time you tip in Hong Kong might be for a hotel bellhop. In all, I think our meal came out to about $28 USD, and there was enough food to feed three. Delicious food, large portions, fast service, and no extra tip: it was perfect. Again, I’m finding Hong Kong incredibly convenient.

Interestingly enough, we ate with silverware at the restaurant; chopsticks were nowhere to be found. Sam says chopsticks are used for certain occasions, but silverware are the default.

After dinner, Sam took me on a quick tour of Langham Place, a huge mall that puts the average American mall to shame. It had a huge variety of high-end stores like Nordstrom and Calvin Klein, dedicated Nike, Under Armour, Converse and Vans stores, as well as others I didn’t recognize. In all, the mall is 15 stories tall. It even has huge “Xpresscalators” that jump four floors at a time (from the 4th floor to the 8th, then another set from the 8th to the 12th). The mall was beautiful, from the sculptures to the glass window panels to the bright lights and vaulted ceilings. It was breathtaking. There’s a good reason they call Hong Kong a shopper’s paradise.

Later that evening as well as the next day, I explored Lok Fu Place (first with Sam, then later with other international students). It’s the closest place for me to shop; a 10-15 walk from campus. Sam says it’s nothing too impressive for the locals, but to me, it’s awesome. It’s basically a five-story mall (three levels above ground and two below) with two supermarkets and an MTR station, and it spans both sides of the street thanks to the top-floor walkway that connects them. Again, accents like the lighting really add to the vibe of the place. It’s a convenient one-stop shop for everything from food to furnishings to clothing. Luckily, I brought an Ikea bag with me, as many shops either charge extra for bags to keep down excess waste. Takeout boxes and disposable silverware often cost extra, and the campus doesn’t have straws since they don’t degrade in landfills. I can get behind the eco-friendly efforts here.

Wednesday, we attended international student orientation and had dim sum for lunch with other students and faculty. Dim sum is a Cantonese style of meal characterized by platters of appetizers, finger food and entrees cut and portioned for a group to share. The servers place the food on a spinner in the middle of the round table, and the diners spin it around and pick what they want from it. Here, we used chopsticks: a white pair to pick food from the center of the table, and a black pair to eat with. The food seemed to never stop coming: sweet and sour chicken, cooked mushrooms, shrimp dumplings, pork dumplings, lotus root, bean paste mochi balls, vegetarian potstickers, spring rolls and much more. I had never tried several of the dishes before and was surprised to find the lotus root was delicious (crunchy, almost like a water chesnut, but with a really cool shape).

Some of the dishes tasted similar to what we might order in the U.S., but the sweet and sour chicken was a major exception. You know that thin red sweet and sour sauce that we use in the U.S.? Not here. The sauce was much thicker and richer, and the dish was garnished with peaches and pineapples, which was a delicious touch. The dish was much more flavorful and tasted naturally sweet rather than the sort of artificial taste we get from American sweet and sour sauce.

The faculty members at our table were very kind and taught some of the students how to use chopsticks, told us about the customs of eating dim sum (which included having the elders at the table serve our first portion to us), things to do in the area, and much more. They were genuine and happy people; I hope I run into them again throughout the semester.

So to finish these posts, I think I’ll start sharing some of the Cantonese phrases I’m learning. This time, Sam taught me how to say “thank you.” Phonetically, it sounds like “mm goi” where the “mm” sound is at a lower pitch, and “goi” rises up rigidly. Cantonese has several tones, and beginners start by learning the first six in the chart above based on whether the tone’s pitch (on a scale of 1 to 5 where 1 is the lowest pitch and 5 is the highest that your voice can comfortably make) and whether it stays stable throughout the entire syllable or fluctuates.

Using the chart, I’d write the phrase phonetically as “mm4 goi1”. This is a common way to help westerners learn Cantonese, as we can’t read Chinese characters. Looking at the pitch chart, the fourth tone starts at a relatively low pitch and dips slightly lower, then the first tone jumps to the highest pitch you’d make in conversation.

So for a quick recap, here’s what I learned over Tuesday and Wednesday: