Wow, things have been busy here over the past few days. Friday night, Hong Kong kicked off Chinese New Year with its annual parade, and we haven’t had classes since, so I’ve gotten to explore more of Hong Kong.

Going into Friday, I knew the parade was going to be a big deal, but I didn’t realize just how big. The parade took place in Tsim Sha Tsui district, a couple blocks from Victoria Harbour. The parade started at 8 p.m., but I was told to get there early because of pre-parade performances and simply to find a place to stand. I got in place around 6 p.m. and saw a couple street performers, like guitar-toting Mr. Wally, a local singer who wears red and white stripes like Waldo.

But, hunger got the best of me, and by the time I grabbed a bite, walked around for some photo ops and got back to my spot, the crowd had ballooned in size and I couldn’t find a good place to stand. But the parade started half an hour late, and the pacing between acts was very slow, so a lot of locals gave up and went home early, meaning I was able to wedge into a spot near the route’s halfway point.

I’ve never seen a parade anything like this one. First, it was at night, so most of the performers and floats were covered in neon lights, which I loved. Second, it also drew acts from around the world. I may have missed some countries, but I know I saw performers from Hong Kong, China, Japan, Taiwan, Korea, the Czech Republic, France, the Netherlands, and the USA. We sent a professional pogo stick troupe and the Seattle Seahawks cheerleaders, both of which seemed like odd choices, but interesting nonetheless. Third, I had never been to a parade in a major city, and it pulled in a crowd far larger than at any other one I’ve attended.

Other than there being a long lag between acts, the parade was great. It was cool to see performers from various cultures and of different disciplines. Aside from pogo pros and cheerleaders, the parade featured a juggler, unicyclists, BMX bikers, a jump rope club, various types of dancers, a marching band and more. I think my favorite performers were the dragon dancers. It seems cliche, but I was really excited to see them. They manage to make the dragon costumes appear so expressive, and it’s definitely a unique skill. 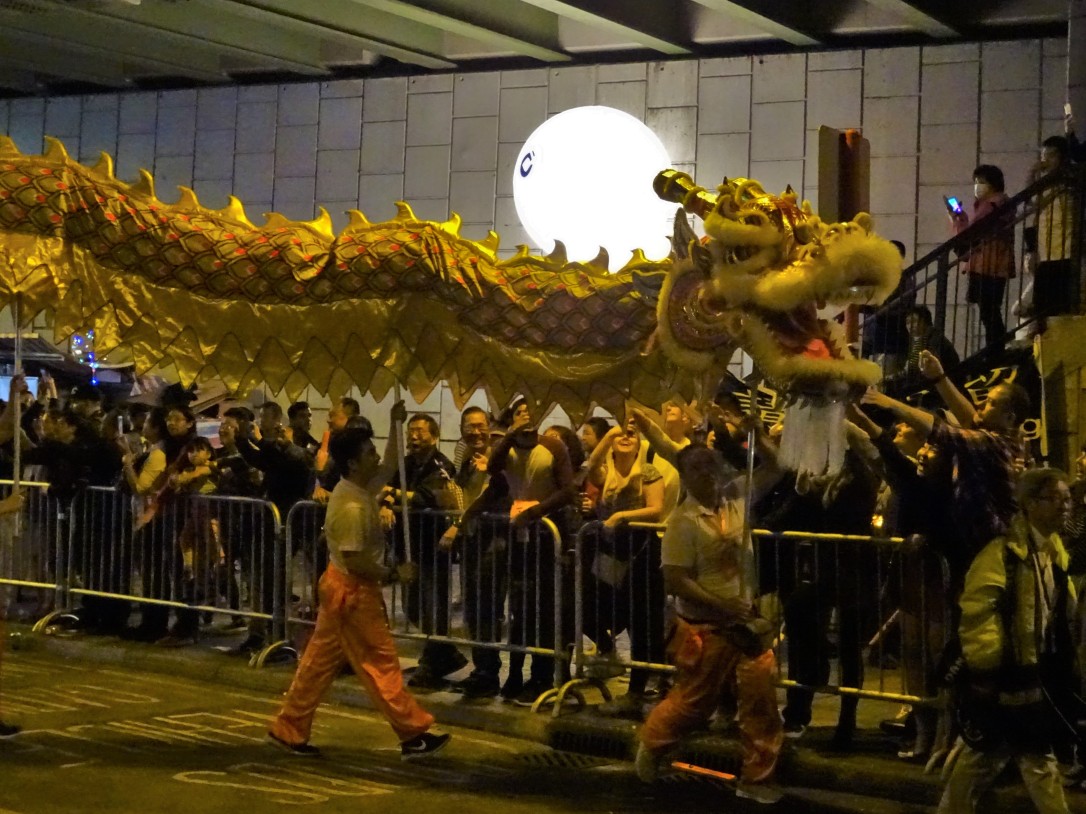 I spent the weekend working on projects, but I have the whole week off from classes. Classes are out from last Thursday through today (Wednesday), but my schedule doesn’t include any Thursday or Friday classes, so I essentially get this entire week off. On Monday, I made a spur-of-the-moment decision to head to Mong Kok for a while. I’ve been there several times but always for a specific purpose. This time, I went with no real goal other than to stop by a local bakery on my way back to campus. When I got to Mong Kok, the main street was blocked off for various performers. I stumbled upon Mr. Wally again and got to listen to a handful of his songs, which I really enjoyed. There was also a pretty good guitar+cajon duo, an armless calligraphist who held his brush in his mouth, and a slew of other singers I found unremarkable.

While I was there, I shopped at the outdoor Ladies Market, which is a street lined with stalls selling goods from knock-off clothing and cheap novelty items up to the slickest fidget spinners I’ve ever seen. I actually found a couple cool items for my family, so it turned out to be a success. Less successful were my attempts to find a bookstore (the one I stumbled upon didn’t have many English books) and lunch. I skimmed the signs and menus outside restaurants until I found one that looked good: This restaurant’s sweet and sour pork caught my eye, and it was rather crowded, which is often a good sign. But when I sat down to order, my server spoke no English, making the process tough. I wanted a plate of the pork and a side of fried wontons, but after taking my order, she returned to convey that they had no more wontons. So I opted for a side of rice. Rather than charging me for the pork and rice combo on the menu, she charged me a la carte. That would’nt hav ebeen a big deal if the food was good, but almost every chunk of pork in the dish was still on the bone. What looked like a decent serving of meat was actually half bone, making it both unfilling and difficult to eat.

By the time I was done, I paid about $9 USD for the worst meal I’ve had here so far. But I made up for it by snagging one of the city’s iconic bubble waffles filled with fruit, which was delicious and refreshing. That evening, a friend and I went back to Tim Ho Wan, one of the area’s Michelin Star restaurants, which was also delicious.

Yesterday, I took the MTR a station north to Tai Wai to pick up my personalized Octopus card, which grants me roughly half-off my fares. While in Tai Wai, I again decided wander around. I ended up visiting a nitty gritty meat and produce market where butchers were slicing cuts and hanging them on hooks in the open air. I’m not just talking pork chops and steaks; I saw cow tongues still in the jaw and various entrails I didn’t bother to investigate. Eventually, I made my way to a nearby cafe that I found on Google for lunch. It was simultaneously a hipster-style cafe, a bar, and a full-service restaurant with Western food, which I haven’t had in a while outside of burgers and the subpar attempts of our campus cafeteria.

I arrived during tea time, which occurs here between normal lunch and dinner hours when people are unlikely to stop for a meal. So, restaurants offer special pricing (sometimes almost half off) and usually smaller menus. I got a Spanish Omelette and a latte, both of which were delicious. It turns out Spanish Omelettes are mainly sliced potato in a baking dish with an egg mixture poured over to fill in the cracks. Delicious, yes, but not what I was expecting from an omelette. I should have Googled it before I ordered, but oh well. I enjoyed the atmosphere, so I’ll definitely be going back at some point.

After lunch, I walked to Che Kung Temple since it was only a few minutes away. It turns out, I stumbled upon it during the Che Kung Festival, which occurs just after the Chinese New Year begins. After combining information from a local I met at the temple, Sam, and the internet, it turns out that I went to the temple on its busiest day. To celebrate the birthday of the god Che Kung, locals visit his temple and spin pinwheels, which they hope will bring them good luck in the new year. They also partake in Kau Cim, which is a type of fortune telling. A person starts with a jar full of numbered sticks and shakes it slightly downward until one stick falls out. Then, the person goes to a nearby interpreter who explains the complex fortune. I took some pictures outside the temple, but only participants could enter that day. Since I had no idea how to participate, I didn’t go in. I’ll visit again during a non-peak time.

After that, I stopped by a bakery, grabbed a couple items, then headed back to campus. Today, Michael and I took the MTR a couple stops east to Diamond Hill to visit the Chi Lin Nunnery and Nan Lian Garden. The nunnery was built in 1934 and renovated in the 1990s, and the garden opened in 2006. Both the nunnery and the garden are based on the style of the Tang Dynasty (618-907), and they make a beautiful complex. All the other times I’ve been to religious sites here, they’ve been crowded. But neither the garden nor the nunnery were exceptionally busy, making the afternoon a peaceful one.

The garden in particular was just gorgeous. The attention to detail in the garden’s upkeep is astonishing, as if not a single branch was left untended. It was somewhat strange, though, to be in such a colorful, peaceful garden that’s dropped among high-rise apartments on every side. The juxtaposition between serenity and comparative chaos was fascinating. I could say more, but I’ll let the pictures below speak for themselves.

For lunch, Michael and I tried a nearby restaurant that served both Western and Asian food. Alongside my chicken and rice, I tried a new food the server called cream soup, which tasted similar to creamed corn or corn pudding. It was a creamy white soup with corn kernels in it, and I enjoyed it.

So here we are. This week has been all about exploring random places in Hong Kong and trying whatever food I can find. I’m definitely glad to have the time since classes aren’t in session.

I know this post was a long one, but thanks for reading through!